They knew they had to get a head start on fan safety !

In 2016, the Iowa Cubs — a Triple-A affiliate of the Chicago Cubs —were looking to upgrade their stadium with a lift-and-tension-based netting system at the team’s facility, Principal Park in Des Moines, Iowa. The ballclub selected Beacon Athletics as their backstop netting provider to oversee their project that would add netting behind their dugouts.After Major League Baseball mandated enhanced netting protection for fans for MLB ballparks in late 2019, the Iowa Cubs decided to extend their netting to both foul poles to protect their spectators from hard-hit foul balls and thrown bats. But, their existing structures were only engineered to handle the dugout net extensions installed in 2016. They could not afford a total reengineering of their system to handle the netting addition extending all the way down the foul lines. 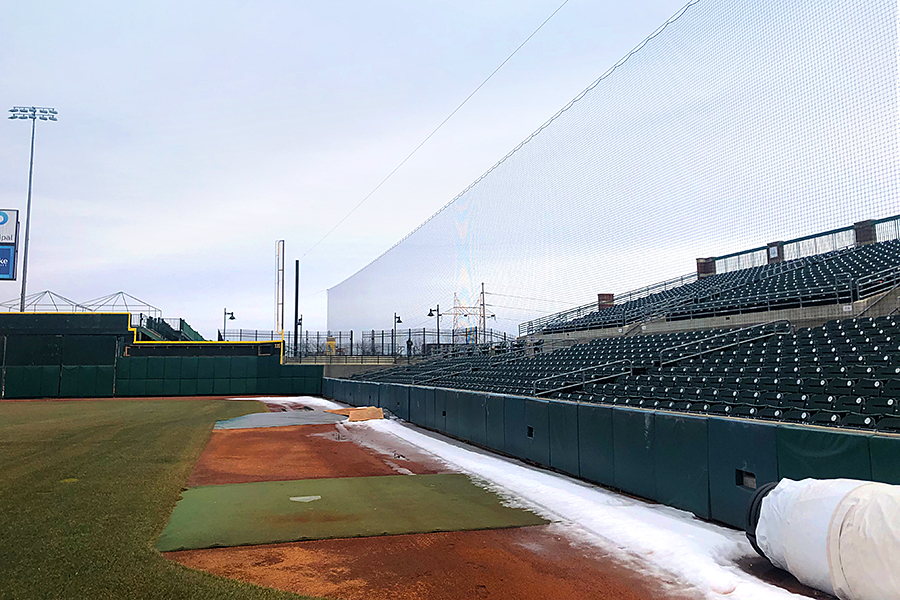 Up against the clock…

To be ready for pre-season exhibition games prior to 2020 Opening Day, the Principal Park and Beacon teams had only four months complete the project. Beacon collaborated with the Iowa Cubs general manager and their stadium architect to find several feasible design solutions that would take into account their budget, installation goals, and timeline.

The extended netting needed to be installed without damaging the delicate surface of the warning track and outfield turf, especially during the later stages of winter.

Despite the fact the support poles were originally designed for netting extensions only above the dugouts, those poles were in the ideal location for supporting the additional down-the-lines netting. To utilize the existing poles — which would not only save money, but crucial time as well — we agreed upon an outboard tie-back netting system that would be designed with no extra poles and, therefore, no additional visual obstructions.

Protection for the system, too.

Beacon’s proprietary FuseLink Protection was included to protect the entire structure itself against extreme weather conditions. FuseLink is custom-designed to “fail” at an agreed upon wind speed, providing a safe and structure-saving solution to excessive wind loads. It allows the cable tensioning system that keeps the netting place to avoid potential structural damage or expensive repairs by keeping its windload within the maximum capacity of the system’s poles and anchors.

With the help of Empire Netting — one of the best installers in the business — the installation of the extended netting system went smoothly, with no damage to the warning track or outfield turf.

The final result was the seamless integration of over 650 linear feet of netting at a height of 25 feet above field grade — without needing any additional poles. The new full netting extensions will keep spectators safe all the way down the lines without obstructing their view of the field while maintaining a complete, safe, ballfield experience.